Securing scientific information online and worldwide with no risk of manipulation: what almost sounds like magic is now possible – thanks to the latest technologies and logical organization with the help of the decentralized blockchain infrastructure “bloxberg”. 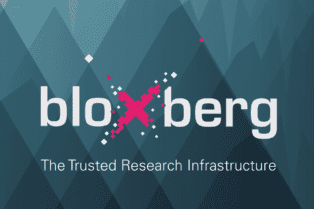 The bloxberg consortium was initiated at the beginning of 2019 under the leadership of the Max Planck Digital Library and consists of eleven leading research facilities from ten different countries. The scientists in the founding consortium agree that bloxberg will change the way scientific data and results will be managed and communicated in future. With bloxberg, the consortium trusts in an online system without a classic client-server architecture, such as is currently used for websites. Instead, decentralised electronic accounting, better known as the blockchain technology, is used.

There are more than enough concrete applications and demands for a transparent and safe online system based on blockchains in science: to verify the authenticity of data, guaranteed protection of intellectual property rights, the exchange of valuable research results, peer reviewing, the publication of papers and much more.

“We repeatedly hear from our researchers that they would like to have a “time stamp” or a way to certify their research data, hypotheses and methods – particularly before these are published” – says Sandra Vengadasalam from Digital Labs. “The use of blockchain technology thus appeared obvious“.

Cryptocurrency as an example

The local bloxberg system is based on Ethereum with the consensus mechanism Proof-of-Authority: every validation node is operated by a research facility with a known identity.
© MPDL

Every new entry in the local bloxberg data base is assigned a key character string and is unalterably linked to preceding entries via a verification key before being saved, just like in the administration of digital cryptocurrencies. Protection against manipulation is guaranteed through a comparison by secure sites, the bloxberg validation nodes. Only scientific facilities are currently allowed to operate validation nodes. Every member of the consortium operates such a node in bloxberg and approves new entries, so-called “transactions” according to a precisely defined and publicly accessible consensus method. This means that entries for research claims no longer have to be limited to individual institutions, for example. Instead, “smart contracts” can be confirmed and saved directly from throughout the bloxberg network. The infrastructure can only be maintained and transactions validated from validation nodes. “We ourselves were very surprised to learn that there has as yet been no global approach such as bloxberg to meet these needs within the scientific community,” reports Friederike Kleinfercher, Digital Labs. “This is why we decided specifically to create our own, public and approval-based blockchain. So whoever operates bloxberg is very well known and has to satisfy certain criteria.”

“bergs” are the “bitcoins” in the bloxberg network

So-called “bergs” are used to interact with blockchain applications or implement intelligent contracts in bloxberg. These can be compared to bitcoins, but are not traded; all of the transactions in the bloxberg network are free. The bloxberg networks offers an application to distribute bergs to every company that wants to build on the network or use the corresponding app’s functions (https://bloxberg.org/faucet/).

One important element of the bloxberg project is the transparent accessibility and the associated documentation of the interface to blockchain, which is based on an Ethereum implementation solution. Independent apps (dAPPs) can be built up via the open bloxberg programming interface. This means that anyone – for example start-ups or scientists – can establish and offer complete services and applications on the bloxberg blockchain. The Max Planck Digital Library has already completed an app exclusively for Max Planck researchers: a certification function that has been integrated in an existing service for research data. This allows Max Planck researchers to give their data a “time stamp” via the bloxberg blockchain and prove high scientific standards.

Exclusively for all Max Planck scientists

bloxberg at work: Every transaction can be tracked live at https://blockexplorer.bloxberg.org/ and the blockchain growth observed.
© MPG

Anyone who wants to “blockchainify” their research data already can use bloxberg: the MPDL offers the “KEEPER” service for all Max-Planck staff members. KEEPER was originally conceived as a long-term archiving tool, but quickly developed into one of the most popular “Sync and Share” solutions for various research data amongst the Max-Planck researchers. “We have already connected KEEPER to the bloxberg pilot!” Friederike Kleinfercher from Digital Labs is pleased to report. ”Our scientists and their cooperation partners can of course, also now certify their data via the KEEPER web interface. All they have to do is click the small berg in the web interface”. MPG researchers can therefore create a ‘Proof of Existence’ for all of their data at the press of a button. This can also be carried out directly without KEEPER at bloxberg.org. Following certification, every user receives a bloxberg certificate containing the transaction number that they can use at any time to validate, in other words check, their certification. The advantage of KEEPER is that the data is saved and archived at the same time. If, on the other hand, certification directly via the bloxberg dApp is used, you have to ensure the permanent storage of your own data yourself because as yet, bloxberg only saves the transactions, but not the data itself. The benefit of this is that bloxberg’s own infrastructure requires little hardware and is fast, and that the actual data storage still lies in the hands of the individual research facilities.

The bloxberg project is already developing at rapid speed. On the one hand, new nodes are being added every month from the whole world of research, and on the other, Vengadasalam and Kleinfercher together with their Digital-Labs team are experimenting with new extensions for bloxberg: “At the moment we are testing various local storage options – similar to the InterPlanetary File System IPFS”, reveals Sandra Vengadasalam.

The number of application cases outside the research context is also growing thanks to the open architecture. Mauricio Tovar Gutiérrez from the National University of Columbia – one of the first universities who wanted to get involved straight away – is enthralled by the opportunities offered by this blockchain: “Blockchain has features and advantages that allow the information that you register not to be modified. This is very important to avoid fraud and achieve greater transparency in a voting process.”

On the initiative of the Max Planck Digital Library (MDPL), eleven leading research facilities from ten different countries joined forces in February 2019 and started work on the project. The consortium is currently made up of the following members: Carnegie Mellon, UCL, ETH Library at the ETH Zurich, Georgia Tech, IT University of Copenhagen, University of Belgrade, University of Johannesburg, University of Kassel, University of Nicosia, University of Sarajevo and the Max-Planck-Gesellschaft.