bloxberg becomes the first Association for the Advancement of Science and Blockchain e.V.

Protaras, Cyprus – October 26-27, 2022 – the bloxberg project becomes the first Association for the Advancement of Science and Blockchain

The fifth bloxberg summit took place as a hybrid conference in Protaras, Cyprus, from October 26-27. This time the annual Consortium meeting was organized for the fifth time in a row by the Max Planck Digital Library (MPDL) in collaboration with the University of Nicosia, one of the bloxberg founders. Twenty-two institutions took part in this year’s summit, hosted at the Sunrise Pearl Hotel by the University of Nicosia. Next to the sessions on member activities, bloxberg projects, and working group updates, a significant change took place regarding bloxberg’s legal status.

Soulla Louca, Professor at the University of Nicosia and founding member of the bloxberg project and Association:

“I feel honored that our University has organized this far-reaching fifth summit for bloxberg. The University of Nicosia is part of bloxberg from the beginning, and I am very happy about the further development of this wonderful initiative. We are looking forward to continue our collaboration with this vibrant, global academic community.”

Roman Beck, Professor at the IT University Copenhagen and founding member of the bloxberg project and Association:
“bloxberg is an amazing project that now reached its next milestone. What started with eleven research institutes in 2019 became the biggest proof of authority DLT system with over 50 universities from around the world, creating a unique ‘blockchain for science’ decentralized infrastructure. With the incorporation as Association according to German law, bloxberg has reached its next level, which allows the network to grow and provide more services for science in the future.”

Tomaso Aste, Professor at University College London:
“The fact that bloxberg was initiated in a Bavarian castle during a snowstorm makes it already legendary. With bloxberg, we are laying down the backbone for a robust recording of scientific activity through a dedicated blockchain infrastructure. This will help research, academia, and society at large. I am honored to be one of the founding members and to serve on the bloxberg executive board.”

Sandra Vengadasalam, bloxberg initiator and deputy manager of the Max Planck Digital Library:
“In 2019, we started with a small consortium with the intention to do a blockchain project together. Three years later, we are the largest Proof of Authority network in the world, with over 50 research institutions as node validators! Therefore, the transformation from a consortium to a legal Association marks a new era for bloxberg. Let’s be excited to see what will happen in the next three years!”

The Association continues to grow

About bloxberg
bloxberg’s mission is to advance science with its own blockchain infrastructure and to enable society as a whole to secure data with the reputational proof of research organizations worldwide. It broadens the scientific landscape of regionally and nationally governed blockchain networks. This makes it the first globally maintained decentralized scientific network for scientists.

Dedicated to this mission, the bloxberg Association facilitates and accelerates the decentralized blockchain bloxberg and scientific applications running on top of it. The excellent reputation of the participating research organizations encourages scientists worldwide to utilize the bloxberg network and the applications built on top of the infrastructure. 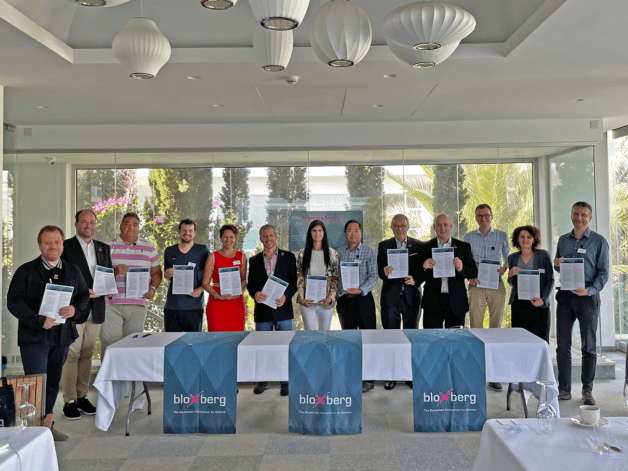